Coming of Age in a Crisis: Young Workers, COVID-19, and the Youth Guarantee 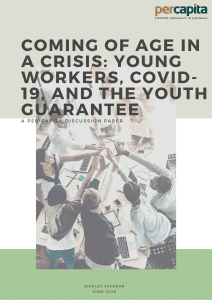 Australian labour force data for May shows that, for the first time since the Great Depression, almost two in three young workers do not have enough work to meet their needs.

With nation-wide unemployment rising by almost 4% and underemployment increasing by almost 5% since the onset of the COVID-19 pandemic, the impact on young workers has been particularly dire. More than 290,000 people between the age of 15 and 24 have dropped out of the labour market entirely. Not only have they lost what work they had, they have given up looking for a job entirely.

Well before this crisis took hold, employment conditions for young people in Australia were grim. Young workers are by far the most likely to suffer from insecure work, with low wages and unstable hours.

While, to some extent, the transition from school to work has long been defined by insecurity, young people today remain in insecure and underpaid work much longer than did their parents and grandparents, and the problem has intensified significantly in the decade since the Global Financial Crisis.

More than half of workers aged 15-24 are now employed through casual contracts, while in 2018 almost 40% of workers aged 25-34 were in a casual, fixed term or part-time job. This has a pernicious effect on their ability to build careers and establish the economic security that is needed to achieve the standard of living Australians have come to expect over generations.

At the same time, many young people are saddled with debt for their education, the repayment of which is no longer linked to the income premiums afforded by higher qualifications.

The COVID-19 pandemic and the recession that has followed in its wake have smashed what little job security there was for young people in Australia. Industries hit the hardest by the economic shut-down, such as food services, hospitality, retail and the arts, are big employers of young Australians, who make up almost half of the workforce in these low-income industries.

It is more than a quarter of a century since young Australians have been faced with a recession as they enter the workforce. Previous experience has shown that trying to establish a foothold in the economy during an economic downturn can cause scarring effects that reduce incomes and living standards for life.

As Australia is faced with the worst labour market conditions in almost a century, it is critical that the futures of our young people are not compromised by inadequate or counter-productive policy responses.

This paper argues for a bold new approach to tackling youth unemployment and insecure work. Policy reform in the areas of employment services, education and training, active labour market programs, social procurement, apprenticeships and graduate employment programs, and private sector training levies are needed to address what has become a wicked problem for young workers in Australia.

We must think beyond providing entry-level, minimum wage jobs to cut youth unemployment numbers, and implement a comprehensive suite of policies to create a genuine Youth Guarantee, under which young Australians are supported to achieve their full potential, and to realise the promise of Australia that has been afforded to previous generations.